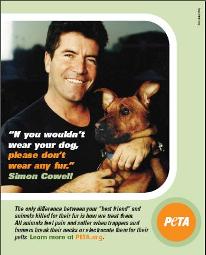 I know I was just talking about how cool Simon Cowell is, but he is at it again.

This time he’s got some choice advice for American Idol hopefuls: Be kind to animals. Everyone knows Simon is notoriously harsh when Idol contestants deserve it, but he’s got a big soft spot for animal advocates. Simon opened up on the set of his new PETA ad, which is due out early this summer, saying:

“The people I work with … are all animal lovers. That’s part of the criteria for judging the show, you’ve got to like animals.”

And he applies the same standard to wannabe contestants as well:

“I once had an incident with a guy who auditioned who actually admitted that he likes killing animals. Didn’t go through.”

Considering that Cowell raked in a reported $36 million last year and has been ranked the second-highest-paid person on TV by OK! magazine, it might be wise to heed his suggestion . . .