In response to a Georgia Department of Natural Resources contest to give Georgia’s hunting and fishing licenses a new look, PETA has submitted its own take on the license, in accordance with contest regulations. Our entry features a bear with a gun standing over a pair of human legs and the words “The Right to Arm Bears.” 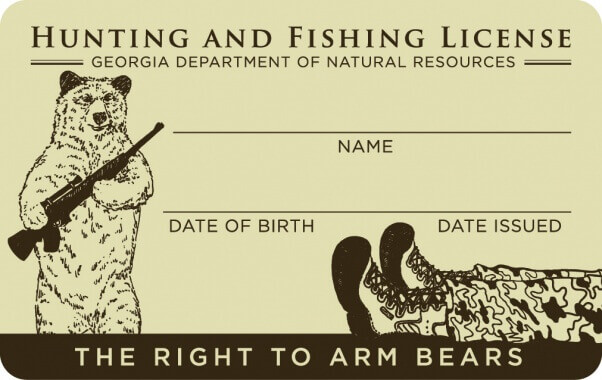 Hunting decimates animal families and breeds a lack of compassion that can be dangerous to all living beings. PETA’s design reminds would-be killers that unless the bears have guns, the fight is unfair, and only cowards would shoot an unarmed individual who wants to stay alive as much as they do.

Hunting and fishing cause animals excruciating pain, promotes insensitivity toward the suffering of others, and disturbs the natural balance of animal populations. In addition to the millions of animals killed by hunters each year, many more are wounded and left to die slowly of blood loss, predation, or infection. Game-management agencies—the very word “game” giving it away—manipulate animal populations not for the animals’ benefit but to maximize the number of animals available to be killed by hunters.