It’s cold outside, a fact that you have no doubt noticed if you live in certain states and have to hurry into and out of your car, home, and office. But as you dash from one heated interior to another, millions of homeless cats who have been released to “fend for themselves rather than risking euthanasia” are battling to survive out there—a battle that many of them will lose. 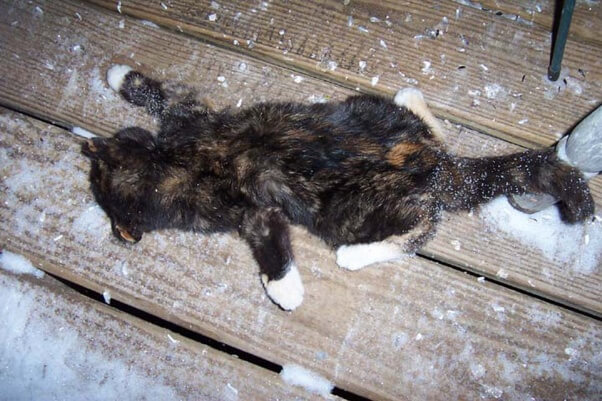 And there was the kitten in Texas who crawled into a car engine seeking warmth and sustained severe burns, a broken pelvis, and a broken leg when the vehicle was started.

Others will fall victim to dogs and other predators. Hearing screams, the owner of a cat in North Carolina went outside and saw two dogs playing tug of war with the cat in their mouths. He died of his injuries. The dogs, who were also roaming unsupervised, had apparently killed at least five other cats who had been left outdoors. 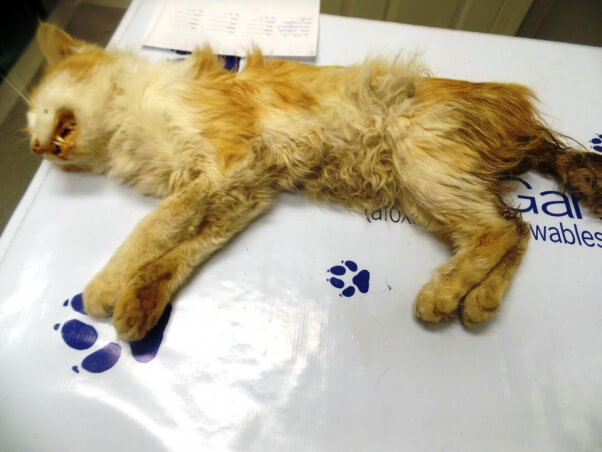 Some will be victimized by cruel people. A cat in Nebraska was found with a bullet lodged in his back; another, in Pennsylvania, with nails in his head and hip after apparently being shot with a nail gun; and another, in Virginia, with a dart in his eye. Cats in Michigan, New Jersey, Pennsylvania, and Texas were recently found with arrows piercing their bodies. A Chicago teenager allegedly doused a homeless cat with boiling water in a video that was posted on Facebook. A man in Pennsylvania admitted to spraying bleach in cats’ faces before beating them to death with hockey sticks.

Cats unsupervised or abandoned outdoors will become victims of all kinds of other dangers, too, including puncture wounds, broken bones, and brain damage from being hit by cars or trucks. Accidental poisoning from spilled antifreeze is a threat. Some cats are stolen by dogfighters to be used as “bait.”

Some people may feed cats who are outdoors, but they aren’t protected from parasites and diseases, including rabies, rhinotracheitis, and feline AIDS (FIV), which is highly contagious and incurable and can only be prevented by keeping cats safely indoors—the way your cat and my cat live.

A PETA fieldworker recently picked up this emaciated feral cat who was suffering from horrific wounds that appeared to be caused by skin cancer, frostbite, and/or attacks from a predator. Half of her nose was missing. 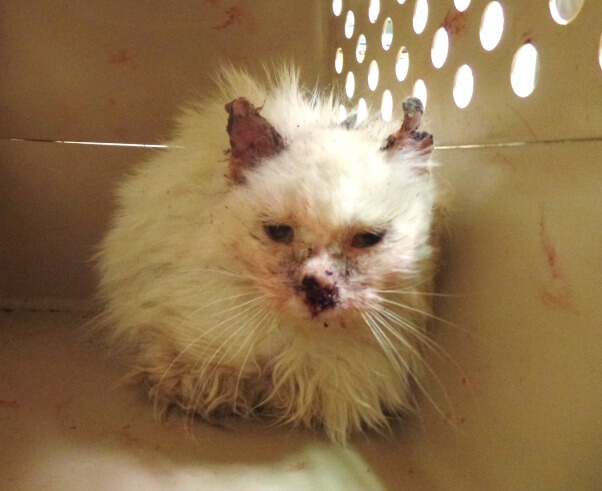 Cats who are left outdoors do not die of old age. The average life expectancy of a free-roaming cat is just 2 to 5 years, compared to 14 years for a cat who lives indoors. Kittens have it even worse: 75 percent of kittens born outside don’t make it to 6 months old.

Socialized or not, cats are not capable of surviving well on their own. Feral cats are genetically identical to the cats who sleep on our beds and who warm themselves in front of our heaters. They aren’t super-felines who can survive subfreezing temperatures—they succumb to exposure and dehydration when water sources freeze, just as any cat would.

Trap-neuter-abandon programs allow shelters to avoid euthanizing unadoptable cats, but they sentence these cats to fates far worse than a painless, peaceful end by euthanasia if they can’t be placed in a real home. Allowing cats to struggle and die in a hostile environment is extremely thoughtless, cruel, and irresponsible.

Keep your cats indoors. Help them adjust and stay content by giving them lots of toys, scratching posts, a window with a view, and daily play sessions. Allow them outdoors only on a leash and harness or in a fenced-in yard, under your constant supervision. 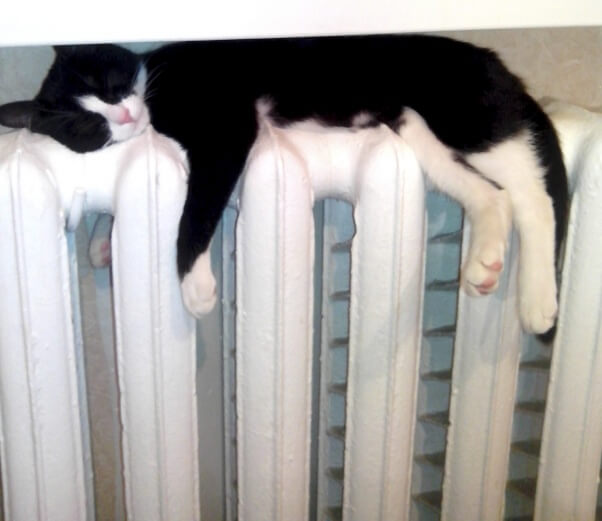 Also, take strays to animal shelters, and while you’re there, encourage shelter management to accept all cats and to educate the public about the dangers that cats face when they’re abandoned outdoors to fend for themselves.