For those of you who haven’t heard of him, Gordon Ramsay runs a restaurant and hosts a TV show in England, where celebrity chefs are worshipped as a form of minor deity. Despite having only 5 TV channels for the entire country, the Brits have more cooking shows even than they have antiques shows, and they have the highest number of celebrity chefs per capita in the entire world. So in England, Gordon Ramsay is a kind of a big deal. He’s also a cold-hearted animal hater—which is where PETA UK comes in to the story. Evidently, Mr. Ramsay’s latest stunt has been to encourage British people to eat more horse meat, even going so far as to feature a horse-meat barbeque on his show, The F-Word. PETA UK’s response to his antics was as swift as it was smelly, and the pictures of their horse-manure dump outside Gordon’s restaurant this morning have been going everywhere in the British media. You can check out some of the press coverage here. 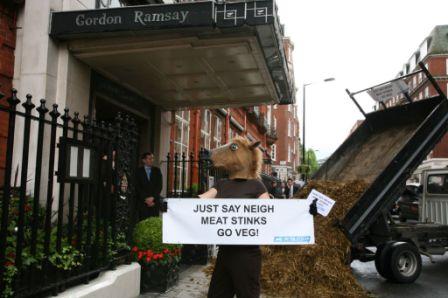