Check out this photo from yesterday’s demonstration outside the New Zealand Consulate-General’s office in Sydney, Australia. The demo was humming along nicely when lo and behold, former New South Wales Premier Bob Carr (Note to Americans: New South Wales is a state in Australia and a “Premier” is, like, a governor) walked up. You can tell from the photo that the girls were enjoying themselves and the coy smile on Mr. Carr’s face tells me that he quite enjoyed the surprise of seeing the demonstrators, who were wearing only giant cardboard hearts, to thank New Zealand farmers for ending the practice of mulesing. For those not familiar with it, mulesing is the hideous procedure where farmers force live sheep onto their backs, restrain their legs between metal bars, and, without any painkillers whatsoever, slice chunks of flesh from around their tail area. 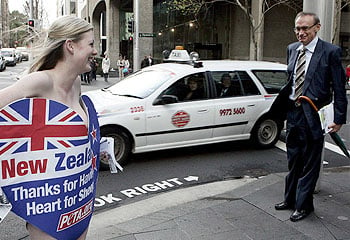 Anyway, for New Zealand farmers to stop mulesing altogether is a huge step forward and is a clear signal to neighboring Australian farmers that it’s time for them to do the same thing or get left in the dust . . .