Though we can all agree that neglecting to feed an animal companion is pretty low, what about knowingly starving or denying an animal water until he or she dies? Well, that’s what glue traps do, which is why selling them makes Lowe’s the lowest of the low.

We’ve sent out one of our custom campaign vans to visit Lowe’s stores in North Carolina, to remind shoppers of what, exactly, the glue traps that Lowe’s sells inevitably do—cause immense suffering and ensure a slow death to whatever animal is unlucky enough to touch one.

Check out the photos from our demo (and just imagine what you’d think if you passed this van with our mouse friend here in the driver’s seat … yeah, we’re good at grabbing attention): 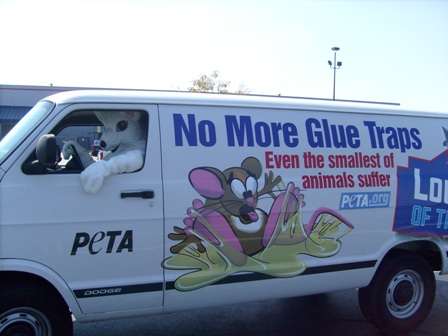 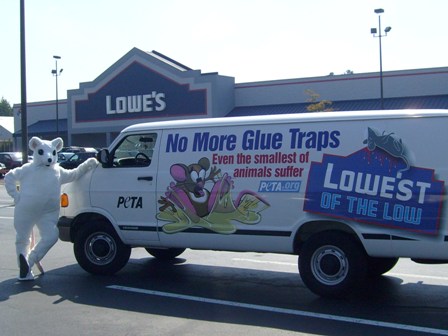 Unlike other major retailers, such as Walgreens, CVS, Rite Aid, Albertsons, and Safeway, Lowe’s has refused to drop these deadly devices from its inventory. Join Ms. Giant Rat in encouraging Lowe’s to change its cruel policy.