For reals. The thing is about 25 feet tall, all told, and he’s pretty tough to miss (I did a classic double take when I caught a glimpse of him peering through the window when they were setting up in our parking lot for a dry run last week). This big guy was outside the U.S. Department of Health and Human Services yesterday to remind U.S. government officials that testing on animals is about as progressive as the stone age. Yes, I know that dinos were extinct by the Stone Age, but I would hate to have to explain that to a 25-foot tyrannosaurus. He really does look pretty menacing.

For more info on the campaign that inspired these demonstrations, here’s a recent post about a Paleolithic government entity called ICCVAM, who have been making a royal mess of things for about a decade now. 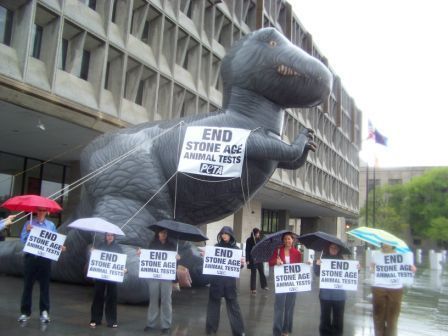