Anderson Cooper recently welcomed Daniel to his show, a 5-year-old dog who survived being gassed at an Alabama animal control facility.

Reportedly, Daniel was crammed into a gas chamber in Florence, Alabama, with four other dogs. Carbon-monoxide gas was pumped into the chamber for a “standard 17 minute cycle.” When workers opened the chamber door to remove dead animals, they found Daniel standing among the dead dogs, alive. 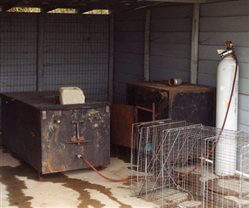 Death is not quick for dogs and cats who are gassed. Locked in dark boxes and slowly suffocated, the dogs commonly scream and the cats go berserk, trying to claw their way out. Many go into convulsions as they struggle for air and try to escape. Daniel must have witnessed a horrifying scene inside the gas chamber, and he is living proof that this crude method doesn’t always work. Some animals must be gassed repeatedly; others have been found stumbling around in landfills after being mistaken for dead and dumped there.

It is not the fault of animal shelters that animals must be put to death, but if the most we can offer homeless animals is an exit from this world, then we owe it to them to ensure that it is painless, peaceful, and dignified. If your local animal shelter or pound is putting animals down with any method other than an intravenous injection of sodium pentobarbital (the most humane method), urge the shelter management to switch (see PETA’s tips for helpful information). You may have the law on your side if you live in one of the 18 states that have outlawed some forms of gassing. If not, write letters to your legislators demanding a law against these torture chambers.