Forty spectators were hurt when a terrified, frantic, and injured bull leapt for his life from a Spanish bullfighting arena and ran through the stands trying to escape. We regret that there is no shame in Navarra: The bull was recaptured and killed. 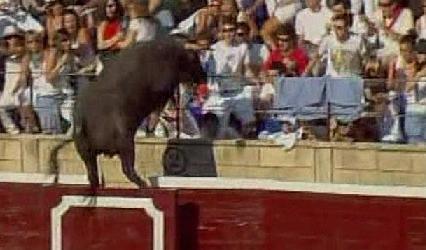 Some media outlets have spun this story as if the bull were the aggressor, but what else would he have tried to do but flee when crowds of screaming people were taunting him? Unlike a typical bullfight in which bulls are repeatedly stabbed until they die in a pool of blood, in this particular twisted event, a bull is subjected to constant goading in multiple events until he eventually ends up in a typical—and deadly—bullfight.

Bullfighting is on the way out. Last month, Spain’s Catalan parliament voted to ban bullfighting in response to public demand. Add your voice by asking Spain’s prime minister to ban this hideously cruel blood sport throughout the country.

Thanks to Leo for sending this story our way.