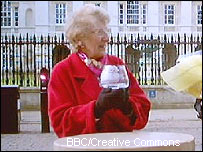 Joan Court is 88 years old, and she’s been working on behalf of animals for a very long time. Yesterday in Oxford, she made another powerful statement for animals that has already garnered international media attention. Accompanied by members of PETA UK holding signs reading, “Save Felix – Oxford, Stop Primate Torture”, Joan donned a prisoner costume and sat in a small cage as she began a 48-hour fast. Joan’s fast is a protest of the vile brain experiments that are being inflicted on a monkey named Felix by a fellow named Tipu Aziz who, in a more civilized society, would have been tried, sentenced, and exiled to some barren desert a very long time ago. PETA UK is asking members of the public to contact Home Secretary John Reid and urge him to release Felix immediately to an accredited sanctuary and stop the expansion of the Oxford animal laboratory. And the redoubtable Joan Court is making a larger point—since this week is World Week for Animals in Laboratories—about the barbaric nature of animal experimentation. Do you really need an octogenarian in a cage to tell you that torturing intelligent primates is wrong? You can read the full story here, but keep Joan in your thoughts today—she’s going to be very hungry.