Scantily clad in sexy pleather uniforms, high-heeled boots, and police hats and holding signs that read, “Animal Skins Are a Fashion Felony,” PETA’s pair of sexy “fashion police” are taking New York fashion week by storm. They’re handing out violation notices resembling citation tickets to fur-, leather-, and wool-wearers for “violating the code of common decency.” This dedicated duo is staking out the shows at Bryant Park and anywhere else suspected violators—including designers—gather. And get this, at their first outing yesterday, they even gave a citation to the notorious pelt pushing fur hag Anna Wintour.

Here are a few pics of their first outing.

Unfortunately, they weren’t able to get a shot of them ticketing Wintour, but I like this shot of the hag getting a pie in the face in Paris a couple of years ago better anyway . . . 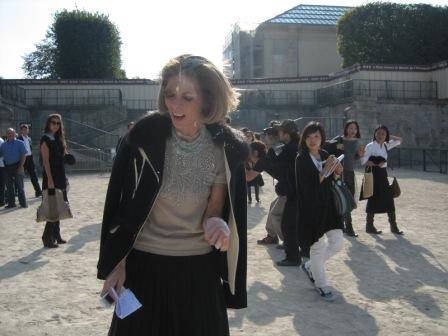