Jerry wasn’t the outgoing, center-of-attention type. Even as a young calf, he seemed to possess the peaceful, quiet air of a wise old man, content to spend warm afternoons gazing out across the landscape with his best friend by his side. 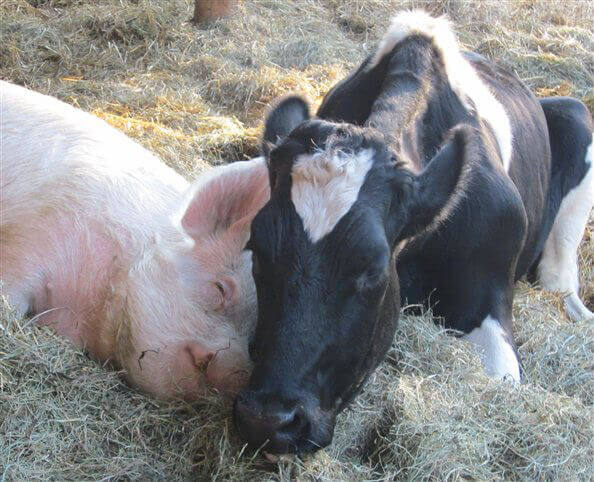 Jerry enjoys a quiet afternoon with his friend Patrick.
Courtesy of the Cow Sanctuary

But Jerry’s early life was anything but serene. Rescued during a PETA investigation of a filthy dairy factory farm that supplied Land O’Lakes, Jerry was crippled, infested with lice and ringworm, and nearly blind from pink eye. He and another calf were taken in by the Cow Sanctuary, and with considerable love and medical care, they healed.

Instead of being killed for veal, as is the fate of most male calves in the dairy industry, Jerry spent his life as every animal should—exploring his surroundings, enjoying the company of friends (especially his pig friend, Patrick), and reveling in treats and love from his guardians.

Last week, with his health declining, Jerry was euthanized. He left this world as quietly as he lived in it, but the steer with the gentle spirit left a permanent mark on the hearts of those who loved him.