Nobel Prize–winning physician, theologian, and vegetarian Dr. Albert Schweitzer once said, “The man who has become a thinking being feels a compulsion to give every will-to-live the same reverence for life that he gives to his own.” It was Schweitzer’s “reverence for life” that inspired our pals at PETA U.K. not only to sponsor the attendance of a vegetarian student at this week’s Albert Schweitzer’s Leadership for Life International Youth Leadership Conference in Dublin but also to place an ad in the event’s program in Schweitzer’s honor. 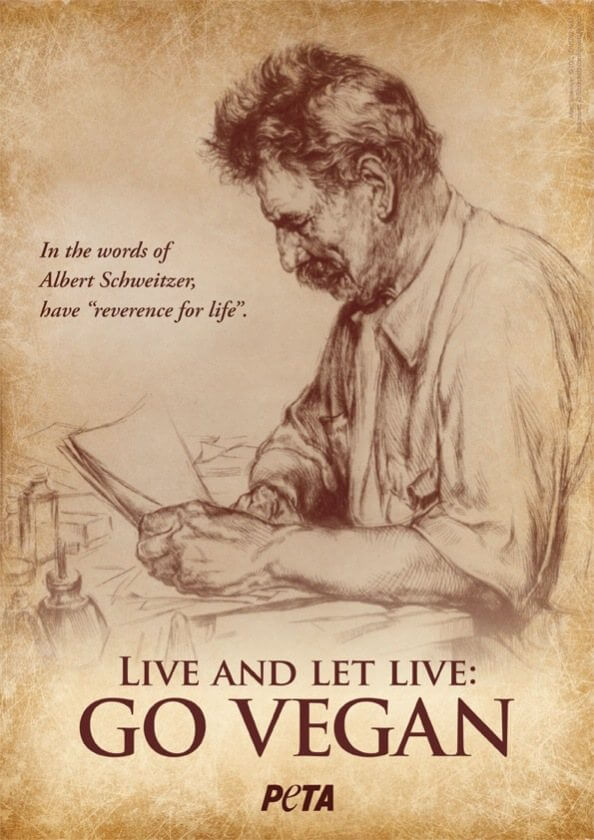 Harley, the sponsored student, has been vegetarian ever since a friend urged her to watch some PETA videos, from which she learned about the cruelty of factory farms and slaughterhouses. During her sophomore year, Harley petitioned her high school to introduce more vegan options to the cafeteria, collecting 320 signatures from a student body of 400 people!

From the time he was a child, Schweitzer was horrified by the violence he witnessed against animals and would likely be even more disgusted by today’s factory farms and slaughterhouses. Chickens, turkeys, pigs, cows, and fish are packed into small cages, filthy sheds, or putrid fish farms for their entire lives—at slaughter, animals often have their throats cut open while they are still conscious or are scalded to death or skinned alive.

Going vegan might not make you a genius—but it will make the world a better, more compassionate place, which is rather brilliant, don’t you think? And PETA can help you get started!