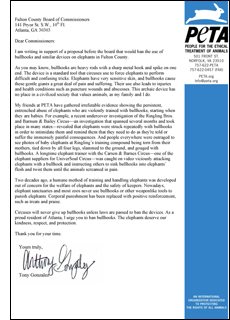 of the Atlanta Falcons has been called “the greatest tight end of all time,” but it’s his efforts for animals that wow us. Indeed, he’s sweeter than a Georgia peach.

Tony’s latest move? He’s urged the Fulton County Board of Commissioners to vote for a proposal, introduced by Commissioner Robb Pitts, to ban the use of bullhooks on elephants in circuses.

He notes PETA’s “irrefutable evidence showing the persistent, entrenched abuse of elephants who are violently trained with bullhooks, starting when they are babies”—and points out that elephant sanctuaries never used bullhooks and that most zoos threw their bullhooks away long ago.