UPDATE: On June 8, 2011, the IOM announced that another biased member of the committee whom PETA had objected to, John Stobo, would also no longer be serving on the committee.

Last year, under pressure from PETA and others, the National Institutes of Health halted plans to send nearly 200 retired chimpanzees back to a laboratory. Smarting from the public outcry, NIH asked the National Academy of Sciences’ Institute of Medicine (IOM) to conduct a study to determine whether the U.S. should continue to be the only nation in the industrialized world to allow invasive experiments on chimpanzees.

The answer seems obvious, especially given the public’s overwhelming disapproval of treating our closest living relatives like laboratory equipment. But instead of giving chimpanzees a fair shake, the IOM stacked its recently announced 15-member review committee with animal experimenters and people from institutions that have openly lobbied against federal legislation to end chimpanzee experimentation. Not only did the IOM not disclose these blatant conflicts of interest, as is required by law, it also stated that anyone representing an animal advocacy group was automatically disqualified from serving on the committee! 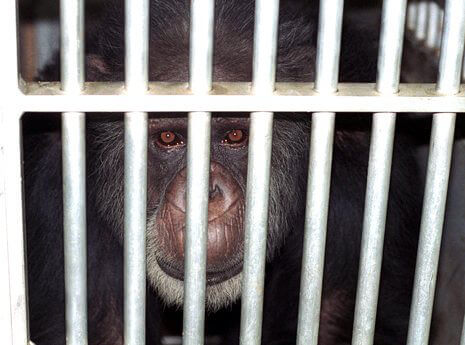 PETA immediately wrote to the IOM protesting the biased committee and calling for it to be disbanded. After hearing from us, the IOM has removed two of the members we objected to, including one who works for a pharmaceutical company that experiments on chimpanzees. Now, if only the IOM would balance the scales and replace those two with people who see animals as more than furry test tubes.

You can help keep chimpanzees out of laboratories by letting your senators and representatives know that you support the Great Ape Protection and Cost Savings Act, which would ban invasive experiments on chimpanzees and other great apes once and for all.