Emory University and the affiliated Yerkes National Primate Research Center seem incapable of maintaining even minimum standards of animal care in their laboratories. But rather than directing funds toward cleaning up their act and ensuring that the animals they imprison receive some modicum of proper care, they’ve chosen to shell out big bucks to pay their lawyers to keep you from finding out what goes on in their secretive laboratories.

PETA unearthed federal records showing that the U.S. Department of Agriculture (USDA) cited Emory on September 6, 2017, after inspectors found one monkey almost entirely bald and another with reddened skin and hair loss running the length of her spine and tail. Such hair loss indicates profound psychological distress. Another monkey was described in the inspection report to be suffering from a large, open wound on her leg, for which she had not received veterinary care. In a report dated September 20, 2021, USDA inspectors documented that a weanling spiny mouse was found dead in a cage, smashed between a feeder and a wall. An investigation determined that the mouse had died from trauma when staff failed to notice the animal when reattaching the feeder, crushing him or her. 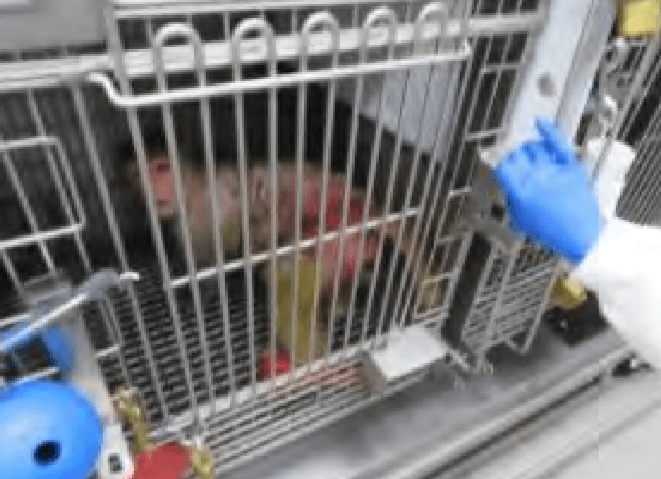 This photo taken in 2017 of an older female Macaque imprisoned at Emory University shows a hideous wound on her thigh. It was the result of incompetence and neglect on the part of school, which continues unabated today.

All these incidents are clear violations of the federal Animal Welfare Act, which establishes the bare-minimum standards of care for animals in laboratories. They’re indicative that something is horribly wrong in the facility, and Emory and Yerkes have been caught mistreating animals other times, too. But instead of correcting this continuing pattern of abuse and neglect, these institutions hid behind their high-priced lawyers, who waged an effort to get the USDA reports scrubbed of the citations so the public would never see the facilities’ glaring failures.

In its appeal to the USDA regarding the citation for the crushed mouse, Emory argued, essentially, What’s one death, really? The appeal asked the agency to scrub the violation because “[i]t was the only event of its type [at] Emory University.” The USDA, thankfully, told it to take a hike. The citation stands.

In spite of receiving public money—hundreds of millions of taxpayer dollars—Emory and Yerkes clearly do not want the public to know the truth about what goes on in their animal laboratories. Don’t let these institutions’ shocking display of entitlement allow them to hide cruel and illegal activities from the public.

Please take a minute today to urge the National Institutes of Health to consider the science of animal sentience, including its own, and stop conducting and funding experiments on animals: