Following PETA’s release of video footage in which an American trophy hunter guns down a curious young elephant, El Al Israel Airlines has confirmed to us that it has banned the practice of shipping hunting trophies.

The video shows the elephant as he peacefully wanders out of the bush just outside Kruger National Park in South Africa. Shortly afterward, Aaron Raby shoots the unsuspecting animal in the head.

The elephant falls to his knees and continues to suffer as Raby—who paid $30,000 for the pleasure of killing him—gets multiple instructions from his guides on aiming better and then, without any sense of urgency, shoots four more times, causing the young animal to rumble in distress.

It’s not known how many more shots, if any, were taken or how long it took for the elephant to die. Raby later paid nearly $20,000 to have the elephant’s body parts preserved for shipment to the U.S.—and he reportedly indicated that he might ship them via El Al Israel Airlines.

Elephants are known to be compassionate and to grieve for dead relatives. We can only imagine the heartbreak that this one’s family must have felt.

Bloodthirsty pleasure killers fly to Africa to gun down animals and line the pockets of safari companies, hunting ranchers, and farms that specifically breed animals to be shot. They’ll keep chasing the twisted thrill of killing majestic animals as long as they can ship their heads, tails, and skins back home. 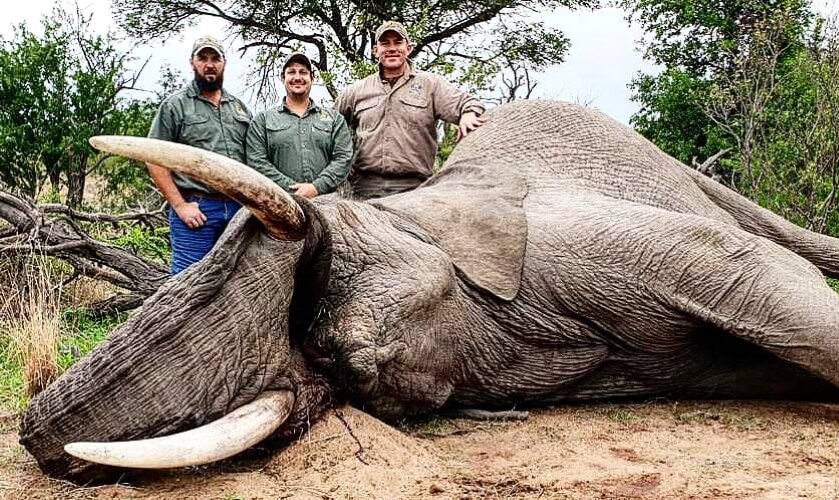 El Al joins more than 40 other airlines that have banned the practice of shipping hunting trophies. Despite the obvious changing tide, United Parcel Service (UPS) continues to support elephant killers and other trophy hunters by shipping dead animal parts.

Earlier this month, PETA members surrounded UPS World Headquarters in Atlanta in a socially distanced protest to call on the company to stop transporting wildlife trophies.

By shipping hunting trophies, UPS is supporting speciesism and the exploitation of animals who are just trying to live their lives free from harm. It has already banned the transport of shark fins, ivory, and certain live animals—and if it can ban elephants’ tusks, it can surely ban their heads and other body parts, too.

Please use the form below to urge UPS to stop shipping hunting trophies today.