Birmingham, Alabama, and Portland, Oregon, are full of people who really love their dogs, according to national surveys that rank them among the most canine-friendly cities. So what better places to debut our ad urging dog guardians to share some love with pigs? 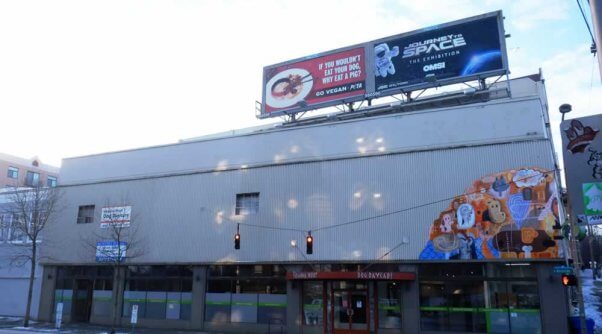 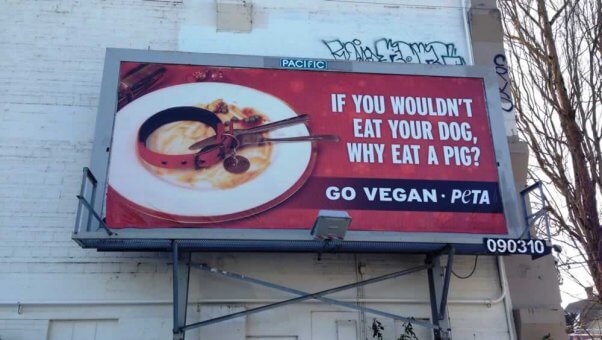 This eye-catching ad is appearing on buses in Birmingham, Alabama, and on billboards throughout Portland, Oregon.

Studies show that pigs are just as smart as the dogs we share our homes with—and probably even smarter. Like dogs, they’re loyal, playful, and affectionate. They can learn to fetch balls and play video games and can even figure out how to turn the heat on and off in their barns.

According to a PETA eyewitness who spent over two months on a so-called “humane” farm that supplied Whole Foods, the young pigs she met there were every bit as lovable as dogs.

“Walking into the enclosures was just like coming home to your best dog friend,” she wrote. “They always greeted me: They would come up to me and playfully chew on my boots, nip at my coveralls, and tug at the zippers on my clothing, just like puppies. … They always wanted to play. They would wait until they had my attention then run off while looking back to make sure I was following them.”

The pigs on this “free-roaming” farm were raised in similar conditions to those found on any factory farm. They spent almost all their time crammed into crowded, concrete-floored sheds with as little as 5 square feet of floor space each. Workers casually struck them and left sick and injured ones to suffer without adequate veterinary care. The only times that they ever went outside were when they were trucked from one shed to another, put on a scale to be weighed, and sent to slaughter.

PETA’s eyewitness was especially fond of a pig she called Sweetheart, who would jump up and make excited noises when she saw the eyewitness. By the time she left the facility, Sweetheart was getting close to “market weight,” meaning that she soon would be sent to slaughter. The observer knew how frightened she would be at the slaughterhouse, surrounded by terrifying sights and sounds. Nobody would be there to pet her and tell her how beautiful she was. She would be viewed as just another walking pork chop—a means to a bloody end—instead of a sensitive, affectionate youngster who just wanted a tummy rub.

Pigs are every bit as deserving of love and respect as dogs and cats are. Please don’t support their institutionalized abuse. Skip the ham this holiday season and enjoy a pig-friendly vegan feast that gives everyone—pigs included—a reason to celebrate.

Yes! I want to save pigs