PETA supports peace and compassion for all, regardless of race, religion, nationality, sexual orientation, or species.

And as we look for ways to cope with the nightmare in Paris, perhaps it’s time to ask if we can open our hearts and minds and oppose violence in all its forms—and not simply when the horror reaches into our families, communities, and homes. 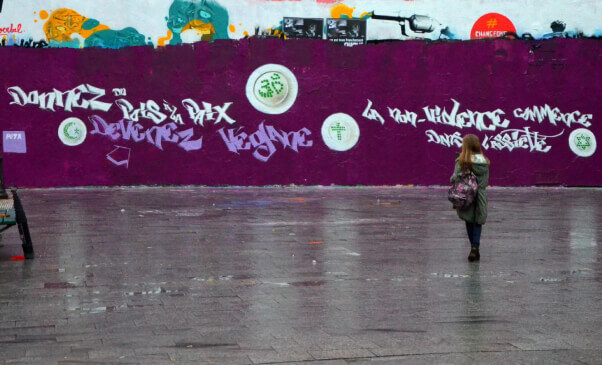 A PETA France mural in Paris after violence that swept the city earlier this year, featuring religious symbols drawn in peas and the words, “Give Peas a Chance – Go Vegan. Non-Violence Begins on Our Plates.”

Growing up in New Delhi, I lived in my parents’ house, which was always full of human refugees, poor and disabled people, and unwed mothers cast out by their families, as well as orphaned animals. My mother always said, “It doesn’t matter who needs help, it only matters that they do need help.”

Over the years, it has dawned on me that we needn’t feel helpless in opposing violence. We may not be able to stop all the wars and outbreaks of hatred in the world, but each of us has the power to end the violence and suffering we’re personally responsible for every time we sit down to eat. We can make a choice and simply opt for nonviolently produced vegan foods instead of meat, dairy products, and eggs.

The animals who are killed for our food never have the freedom to do anything natural or enjoyable. They spend their lives crammed into tiny and filthy cages or pens with barely room to move one step—in other words, deprived of a life at all—before being killed in frightening slaughterhouses.

Many great peacemakers embraced this ideal of nonviolence. Everyone knows that Mahatma Gandhi followed a nonviolent diet and spoke out against frightening animals and stealing their lives from them for a fleeting taste of flesh, one of his many good lessons.

The Nobel laureate Isaac Bashevis Singer, whose family fled genocide in Nazi-occupied Europe, became a vegetarian when, from the window of his rented room, he viewed cattle in shackles being beaten down a ramp to their deaths. Many Quakers and Grahams in England and the U.S. who fought for the emancipation of women and the abolition of the slave trade refused to eat meat so as to avoid violence to their own bodies and to animal life.

Practicing nonviolence in the face of violence requires resolve perhaps, yet it is an extremely easy task to act compassionately and to be consciously nonviolent to those who present no threat to us whatsoever—which is the case with the animals who are eaten.

Perhaps the way to show that our words against causing terror to others are serious words backed up by personal deeds is to take a step toward peace and justice by wiping violence off our plates. By showing compassion for all beings, regardless of race, religion, gender, or species, we can make good on our stated desire to help reduce pain and bloodshed in the world.