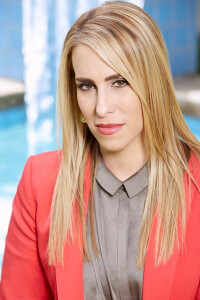 When psychotherapist-to-the-stars Dr. Jenn Berman first heard about the National Institutes of Health’s (NIH) cruel experiments on baby monkeys—in which the infants are separated from their mothers and terrorized with loud noises and electronic snakes—one question immediately popped into her head: “What kind of person does things like this?”

The Couples Therapy host has the answer—and she reveals it in an essay she wrote for The Hill.

“The intentional, organized and long-term abuse of animals by NIH researchers is a troubling sign that the people conducting these experiments are potentially suffering from a serious psychological disorder,” she writes. “Indeed, one of NIH’s own surveys assessing symptoms of antisocial personality disorder includes the question ‘In your ENTIRE life, did you EVER hurt or be cruel to an animal or pet on purpose?’ Certainly, NIH experimenters would have to check this box.”

As a mother of two, Dr. Berman can empathize with the mental anguish endured by mother and child during these experiments. She is especially alarmed by the experimenters’ derisive laughter, which can be heard in one video clip as a drugged mother monkey struggles to stay awake so that she can comfort her distraught baby.

“Such callous attitudes and behavior are tremendously unsettling—particularly in light of a growing body of research that identifies the association between cruelty to animals and mental illness as well as the link between a history of animal abuse and concurrent or subsequent human-directed violence,” writes Dr. Berman. “Just because this abusive behavior is occurring in a laboratory and cloaked in ‘science’ is no reason to discount its gravity.”

Not only are the experiments cruel, they are also pointless and unnecessary, according to Dr. Berman, who notes that it “doesn’t take a genius to figure out that maternal deprivation produces depression, anxiety, and attachment issues among other psychological problems” and that, despite the millions of dollars thrown at these experiments, they have never led to any treatments for mental illness.

Dr. Berman’s conclusion? People who intentionally terrorize babies should take a moment to study their own behavior. “NIH experimenters say that they are studying psychopathic behavior in monkeys, but it’s clear that they—and the people who keep giving them millions to do it—are the ones who need to have their heads examined.”

To read Dr. Berman’s essay in its entirety, visit The Hill.