Remember the Exxon Valdez disaster? It may soon be seen as small potatoes compared to the ever-spreading, ever-gushing oil spill off the Gulf Coast. But when it comes to how oil affects wildlife, even “minor” spills can cause major damage. As the International Bird Rescue Research Center points out, millions of birds die every year because of oil from jet skis and motorboats as well as oil washed off streets and into storm drains after it rains. That makes it pretty important to watch out for improper trash disposal.

So instead of blaming big business for oil spills, let’s encourage people to do something positive! Ask everyone you know to curb America’s appetite for oil and reduce the chances of devastating spills—of both oil and manure—by going vegan. You might also consider making a donation to an organization that works day in and day out saving wildlife, including birds who are unlucky enough to suffer as a result of human carelessness. 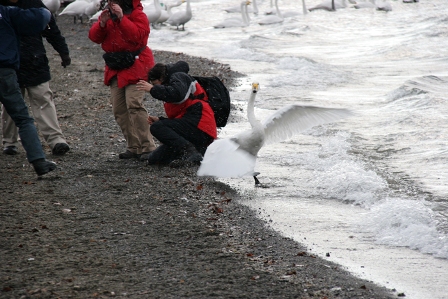 A PETA staffer rescued this swan and removed painfully embedded fishing hooks from her foot and beak.