Although I’m now a writer, my parents raised me to be a hooker—and my dad was even a preacher, for heaven’s sake! OK, I’m talking about hooking fish, which, while it may not be “the world’s oldest profession,” is long overdue for retirement.

Unfortunately, PETA wasn’t around when I was a kid to help prevent me from getting caught up in the abuse of aquatic animals. But a brand-new anti-fishing campaign launched at the Seattle waterfront on Tuesday aims to do that for today’s kids. Seattle was picked for the first of a series of PETA actions leading up to Saturday’s National Fish Amnesty Day after being named one of the top 11 urban fishing cities in North America. 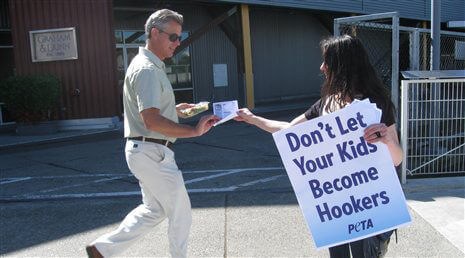 Many people stopped to take our leaflets and talk to the demonstrators. Some were so intrigued that they asked in-depth questions about how fish suffer when they are impaled in the mouth and pulled into an environment where they cannot breathe. These curious folks left agreeing that fishing is wrong. If two animal advocates can change these people’s minds, what could PETA’s 2 million members and supporters do?

All parents who fish send their kids the dangerous message that it’s entertaining to torment and abuse animals. Want to raise your kids to be compassionate toward fish instead of cruel? PETA can hook you up!