A driver in southern Georgia was shocked when she spotted a pitiful-looking dog hanging on for dear life to the top of a crate in the back of a pickup truck that was careening down the interstate. A heavy chain around the animal’s neck that was hooked to the top of the crate looked as if it could have choked the dog, but it may well have been the only thing that kept the pup from flying onto the asphalt as the truck whizzed in and out of traffic. 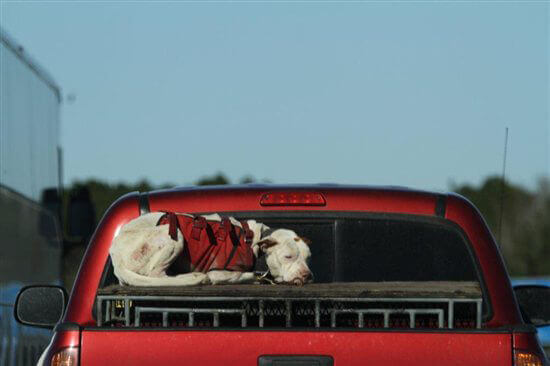 Thinking quickly, the woman immediately got behind the truck and snapped pictures of the dog and the vehicle’s license plate. She was shocked to see that the dog was underweight, covered with wounds, and wearing a hunting vest. As soon as she got home, she contacted PETA and forwarded the pictures to us. 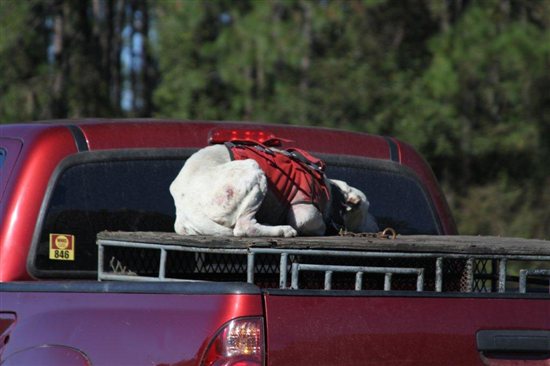 PETA’s Emergency Response Team traced the license plate to a county in Florida, a state that has a law against transporting animals inhumanely. Forcing a dog to try to hang on for fear of falling out of a speeding vehicle certainly qualifies, so PETA shared the evidence with law-enforcement officials without delay.

In no time, officers were knocking on the teenage driver’s door. He admitted that he had used the dog for hunting and then chained the animal in the back of the truck. The teen agreed to turn over the dog as well as five others and was sentenced to 150 hours of community service. The officers took the dogs to a local animal shelter, where they have been put up for adoption.

If you ever see an animal being cruelly transported in the back of a pickup truck, alert authorities. Even if it isn’t specifically illegal in your area, you can still ask police to intervene, arguing that not only does it jeopardize the animal’s safety, other drivers on the road could also be seriously injured or killed if the dog fell out and caused an accident.