The first time that PETA staffer David Perle saw Dizzy, the hamster was nestled in the arms of a young girl who had rescued him from an apartment complex parking lot and was searching for his owner. A group of boys had tried to tell her that he was theirs, but she suspected their motives were less than pure and refused to hand Dizzy over. (A PETA staffer in the making, perhaps?) When she happened upon David, he agreed to take the little hamster in if no one claimed him.

So that very night, David’s two cats, Ella (after Fitzgerald) and Billie (after Holiday), welcomed their new roommate. When a friend sent David a picture of Dizzy Gillespie with his cheeks puffed out as he played the trumpet juxtaposed next to a picture of a hamster whose cheek pockets were stuffed with goodies, the resemblance was uncanny, and the hamster was named, completing the jazzy family. It’s a wonder that Dizzy didn’t get dizzy rolling around the apartment inside his plastic hamster ball.

We’ll never know how Dizzy’s life started—it’s possible that someone purchased him from a pet store and then dumped him outdoors when he was no longer wanted. But we know that he was happy and loved after he was lucky enough to be rescued by a wise little girl and adopted by a caring guardian. 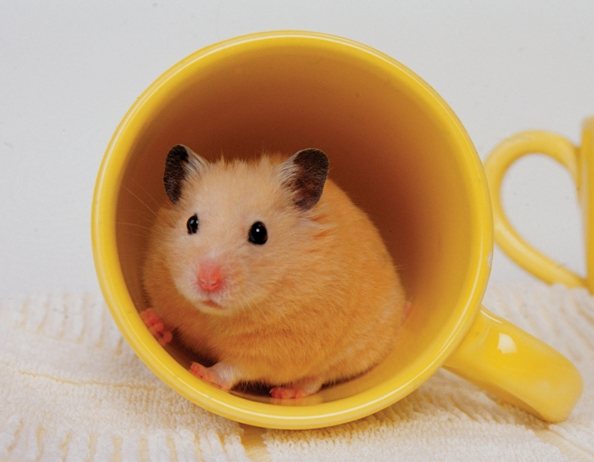 Do you have a great animal-rescue story? Share it in the comments.