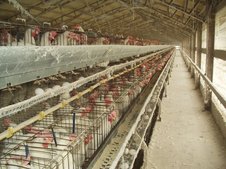 Tomorrow afternoon, PETA members will be demonstrating against the horrific cruelty involved in factory-farm egg production at, of all places, a Trappist Monastery. The perpetrators in question are a group of supposedly peace-loving monks who run an operation at Mepkin Abbey in South Carolina that crams 20,000 chickens into tiny wire “battery cages” so small that they barely have room to move. Although Mepkin’s monks don’t grind the male chicks up in macerators themselves—egg farms don’t have any need for male chicks, for obvious reasons—their suppliers do, and this little deal with the devil doesn’t reflect particularly well on them either. In the spirit of Christmas (which is getting ominously close), now’s a really good time for these monks to think about a new way of participating in what they call “the caring cultivation of the Earth and its creatures” that doesn’t involve torturing defenseless animals. I’ll post pictures of the demonstration tomorrow—the protestors will be stationed outside the stores in Charleston and Columbia that sell Mepkin’s eggs—but in the meantime, you can watch footage from our investigation into Mepkin Abbey below.