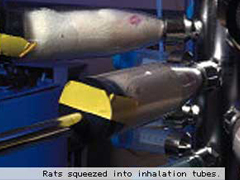 Sadly, this headline isn’t a joke. To say that our history with the so called environmental group Environmental Defense (ED) is sordid is a bit of an understatement. Let’s just say that it more than ruffles our feathers that ED reps sit on all sorts of gov’t panels and always advocate for more animal tests—and against first seeing what previous info there may be on whether people are even exposed to a substance. It also didn’t sit too well with us when PETA reps were walking the halls of the EPA pleading for anyone to look at methods to replace lethal dose testing and ED told us to our face that they were not interested in the alternative method. And it really got under our skin when ED fought tooth and nail against our push (eventually successful) to incorporate some non-animal toxicity testing methods into the HPV program instead of injecting animals with toxic substances into their abdomen.

To say that ED is notorious for pushing animal testing is also an understatement, so I guess it shouldn’t be a huge surprise that the group is once again calling for a massive animal-testing program despite clear evidence that animal testing does not protect human or environmental health. Now this organization has set its sights on the new field of nanotechnology and, together with chemical giant DuPont, has designed a testing strategy for nanomaterials that relies heavily on crude and cruel animal tests.

It’s incredibly ironic to me that people involved in a field as cutting-edge as nanotechnology are pushing for the same old animal tests that failed to predict the hazards of asbestos, mercury, benzene, chromium, arsenic, and tobacco smoke, to name just a few. ED should look at the many human-relevant non-animal testing methods available now and use a step-by-step approach to testing. Since even the U.S. Food and Drug Administration admits that 92 percent of drugs that pass animal experiments fail in clinical trials in humans—and since animal tests are expected to fail even more miserably with nanomaterials because their minute size does not allow efficient tracking in animals—ED’s position is indefensible.

Notable scientists specializing in nanomaterials safety research are pushing for the use of existing in vitro (non-animal) test methods and the further development of additional ones. A recent landmark report is pushing for the same. But ED remains oblivious to the recommendations of prominent scientists and refuses to recognize that experiments on animals have severe limitations—both ethical and scientific.

And this is where you come in. Click here to take ED’s online survey and tell them what you think about their pushing cruel animal tests. You can also click here to take action from our site.