Experimenters at the University of Washington’s (UW) Washington National Primate Research Center (WaNPRC) seem to be feeling the pressure from the public, thanks to our recent video that provided the first-ever look inside this secretive laboratory. UW doesn’t invite people in to see the highly social and sensitive monkeys who are confined for years to cages the size of a kitchen cabinet. But the video blasted across social media platforms, local TV stations, and mobile billboards was recorded by the experimenters themselves just a few years ago.

In the video, you see the soul-crushing reality of the monkeys’ daily lives: the small, barren cages; the lack of natural light; and the deafening sound of metal on metal as these desperate and profoundly distraught monkeys endlessly pace or hurl themselves against the sides of the cages.

In its desperation to excuse these horrors, the WaNPRC recently posted FAQs attempting to defend its caging and housing practices—but its “facts” are misleading, weak, and unconvincing. Perhaps the greatest irony is that for more than three decades, scientists at the WaNPRC have been publishing papers acknowledging that the cages and conditions that the monkeys are kept in have profound negative impacts on animal welfare and even distort experimental outcomes. A caged macaque is not a representative model for normal human physiology, immunology, or behavior.

In nature, macaques live in large groups, with rigorous hierarchies and an intense focus on social relationships. Infant macaques are adored, and female macaques remain in their birth group for life. Macaques will travel several miles a day through complex, diverse habitats where their intelligence, nimble fingers, and climbing and swimming abilities allow them to forage and explore for fruits, berries, nuts, leaves, insects, roots, buds, and more. When they stop during the day to rest, grooming is common among the adults while the younger animals play. At night, the troop returns to a favorite sleeping tree, where they find safety and comfort by huddling together. This extraordinary behavioral and ecological flexibility, matched only by our own, has allowed macaques to spread around the globe.

Adult male macaques are about the same size as a 2-year-old child. At the WaNPRC, macaques are confined alone to 3-foot-high cages with less than 6 square feet of floor space. A metal perch made of two steel bars is located a foot above the wire floor. They can turn around in the cages—and that’s about it. Female macaques, who are slightly smaller, are routinely separated from their infants shortly after birth. The only thing worse than being in a cage at the WaNPRC is being alone in a cage after your baby has been taken from you.

It’s time to fact-check the WaNPRC’s claims about monkey housing and enrichment.

WaNPRC’s claim #1: At WaNPRC we have a dedicated behavioral management team that works closely with our veterinary and husbandry teams to provide the best possible care for our animals.

The truth: It fails to mention that reported systemic financial crises have led to draconian cost-cutting measures. The WaNPRC’s behavioral management team has been gutted over the past three years and is severely understaffed. Retirements, layoffs, financial shortfalls, and the difficulty of finding people willing to spend day after day observing these caged monkeys’ pain, fear, and despair have meant that fewer and fewer staffers are available to observe and/or design interventions to reduce chronic behavioral problems such as stress-induced hair plucking, self-biting, and stereotypies. And the monkeys are still alone in cramped cages.

WaNPRC’s claim #2: Social housing is the DEFAULT housing condition for ALL animals. We maintain socialization rates of at least 80% or higher each month.

The truth: The devil is in the details. Seattle maintains 400 to 500 macaques in its underground and windowless laboratories. The vast majority of these monkeys are on active experimental protocols—they’re being used in experiments and not included in that 80%. The vivisectors at the WaNPRC are a remarkably arcane bunch, and despite countless publications over the last 30 years showing that single housing causes physiological and immunological variation in monkeys that can skew research results, they continue to request and be granted housing exemptions. 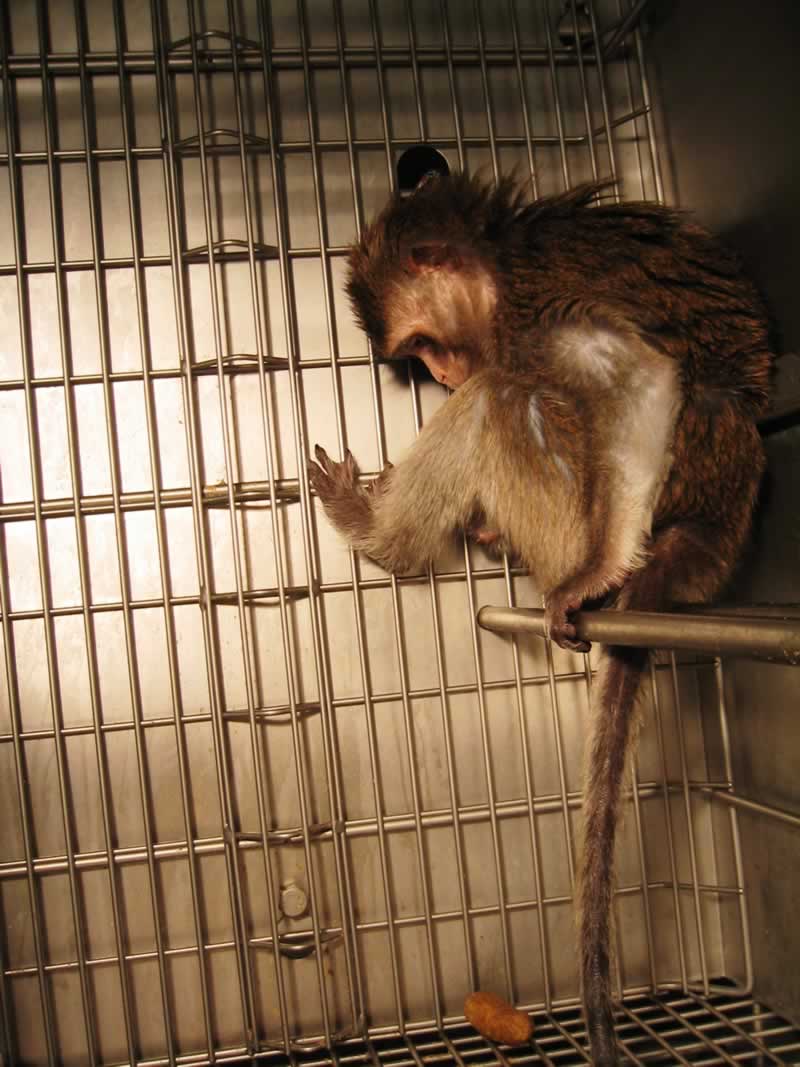 WaNPRC veterinarians pass out clinical exemptions to allow single housing as well. This happens when monkeys are sick from unintended infections like MRSA, have chronic diarrhea, or simply fail to get along with other monkeys. In a recent eight-month period, the veterinary staff reported 217 clinical cases of vomiting/gastrointestinal disease/diarrhea, 19 cases of rectal prolapse, 323 cases of trauma, and hundreds of other clinical cases not directly associated with experimental protocols. While it is true that federal animal welfare regulations strongly encourage social housing, the reality is precisely what you see in the video: Nearly every monkey is singly housed.

WaNPRC’s claim #3: [T]he majority of our non-exempted animals are socially housed each month.

The truth: This statement is clearly designed to mislead the public. “Non-exempted animals” refer to only those monkeys not being used in experiments—and this is a small number. Too many of the WaNPRC’s monkeys are exempt from social housing, and the remaining minority are rarely pair housed. Rather than investing resources to ensure successful pairing of monkeys, the WaNPRC exploits a loophole in the federal regulations and can claim that monkeys are “socially housed” if it puts two individually housed monkeys in adjacent cages with bars spaced just widely enough on one side for the animals to stick their fingers through. They refer to this as “grooming-contact” or “protected-contact” housing, and it is a ridiculous and cruel substitute for pair or group social housing. And even this meager amount of contact is often temporary as a result of research needs—paired monkeys are broken up and assigned to different experimenters or protocols.

WaNPRC’s claim #4: There are very important reasons why an animal may be singly housed for a period of time, which include: Experimental reasons which require an approved Institutional Animal Care and Use Committee (IACUC) exemption that includes scientific justification.

The truth: What it forgot to mention is that the university’s IACUC acts like a rubber stamp committee, approving nearly every request for an experimental exemption to pair housing. UW’s IACUC has been repeatedly cited by the U.S. Department of Agriculture (USDA) for—and the university has been fined for—failing to provide adequate oversight for the institution’s animal use program. It’s once again under investigation by the USDA and the Office of Laboratory Animal Welfare. The steady stream of fines and investigations may be linked to the composition of the IACUC, which is dominated by animal experimenters, institutional employees, and even community members whose livelihoods are linked to animal use.

WaNPRC’s claim #5: The video posted on extremist websites pertaining to animals at the WaNPRC at the University of Washington were produced between 2012 and 2013. Between 2012 and 2017, four National Primate Research Centers (NPRCs) participated in a joint research project focused on improving captive primate well-being by collecting and assessing temperament data based on an animal’s response to novel stimuli.

Even though the footage was recorded between 2012 and 2013, the conditions at the WaNPRC have not improved. Monkeys are still confined to cramped, barren steel cages accompanied only by their frustration and are still deprived of everything that would make their lives worth living. Subsequently, they exhibit signs of extreme psychological distress and clinical depression, including hair-pulling, self-biting, hair loss (alopecia), and stereotypic movements, such as pacing and rocking. The WaNPRC and the other primate centers have not acted on the information from Novak’s studies to improve conditions for the monkeys.

The truth: Although the purported point of these four-decade-long studies was to show how monkeys suffer by being caged in laboratories, with an eye to preventing this trauma—and even though Novak published 100 journal articles on her research—NOT ONE improvement to help monkeys used for experimentation has been added as a requirement to the federal Animal Welfare Act.

WaNPRC’s claim #7: The temperament assessments were recorded on video so that they could be scored by the same individuals thereby reducing potential observer bias.

The truth: Dr. Lisa Jones-Engel, PETA’s own primatologist and a former UW professor, said this:

These videos reveal an astonishing lack of scientific rigor. Experimental conditions vary widely and exhibit a clear lack of standardization of research variables, such as housing/testing conditions, age, sex, and familiarity with the tester. The scientists themselves acknowledge as much in their publications, citing a lack of consistency in their study subjects and design.

The WaNPRC opened six decades ago, and in all that time, it has not produced the promised marketable vaccines to protect humans against disease. It’s time for this pointless and abusive center to close.

Shut Down the Primate Center!