What could have been Prudence’s last day on Earth turned into the luckiest day of his life when a PETA staffer rescued him just in the nick of time from a cruel person who was planning to use him for food. 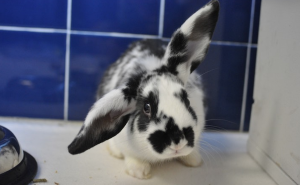 Prudence was kept along with other doomed rabbits in a cramped, filthy plastic crate with absolutely no shelter or bedding to protect him from the bitter winter cold. Even though the young rabbit had only been in the crate for about a week, his feet were already stained from standing amid his own urine and feces.

Probably thanks to his young age (he’s estimated to be between 4 and 6 months old) and his short time in this individual’s shed, Prudence was given a clean bill of health by a veterinarian. One of his ears tends to flop down—giving him a somewhat rakish appearance—and we’re not sure why it does that, although we do know that he was handled roughly and even carried by his ears by his previous owner. 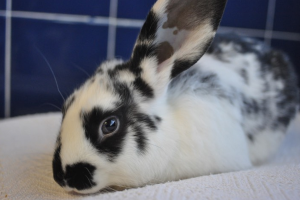 Prudence isn’t one to hold a grudge, however (that wouldn’t be prudent). He is friendly and adventurous, bounding up to visitors without hesitation to give them a good sniff and to get his gloriously lopsided ears scratched. His spacious digs at PETA’s Sam Simon Center offer breathtaking views of the Elizabeth River, which he enjoys by leaping up onto the windowsill and climbing a cat tree like a long-eared monkey. 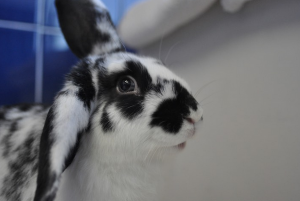 Prudence enjoys listening to classical music, eating Timothy hay and dried papaya, burrowing in cardboard boxes, dashing through tunnels, tossing his toys in the air, flopping dramatically on his side, and even opening his tiny mouth wide for the occasional yawn. He is litterbox trained and addictively fluffy, and he’ll be spayed prior to adoption. If you live on the East Coast and feel like you need some Prudence in your life, e-mail [email protected].