An alert resident in Yorktown, Virginia, called PETA to tell us that a bird was caught in a glue trap set in the rafters of a Wal-Mart store. The trap was one of many that had been set by a bird-removal contractor to catch birds who wandered into the store. PETA staffers hurried to the scene and rescued the bird, and we rushed him to the local SPCA. The agency was able to remove the bird, a member of a protected species, from the glue trap, but the stress and injuries that he had endured were substantial, and he passed away overnight. 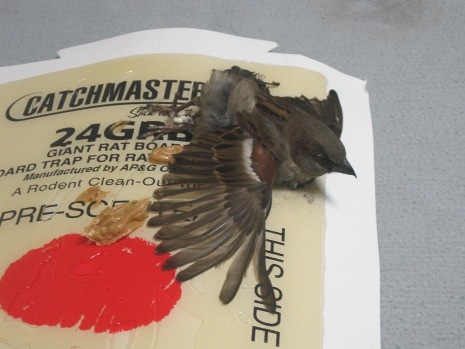 PETA alerted Wal-Mart headquarters to the sad incident, and Wal-Mart quickly terminated its contract with the bird-removal company for breaching a corporate policy, which prohibits birds from being harmed during removal. Local animal-control officers also ordered the bird-removal contractor to stop using glue traps for bird control, and they visited all local big-box stores with garden departments to inform managers that glue traps set for bird removal is cruel and will not be tolerated.

In a related victory, Bank of America announced that it is removing glue traps set for rodents. PETA apprised the bank of the cruelty and disease risks inherent in glue traps, so it agreed to test alternative tactics, which were found to be effective.

The kindhearted Wal-Mart customer helped prevent many birds from suffering in cruel glue traps. If you see glue traps set for birds or rodents in any establishment, please politely ask the manager to remove them and report any traps specifically set for birds to local authorities.