After hearing from PETA, a Brooklyn gallery quickly canceled plans to present a demonstration in which frogs would be cruelly injected with women’s urine and also given away to event attendees. PETA decried the needless suffering of the frogs involved and called for the gallery to abandon the demonstration. 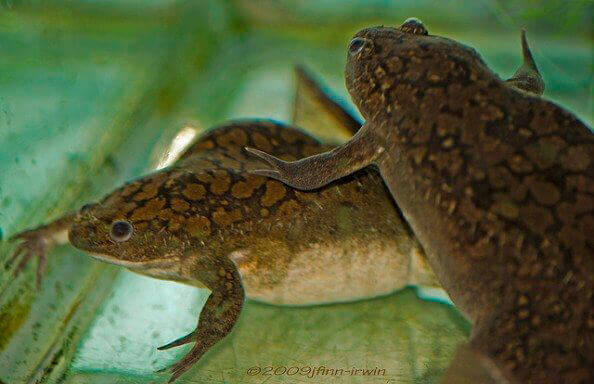 The gallery, Proteus Gowanus, had planned to host an exhibit in which an anthropologist would invite women to watch as he injected their urine into two African clawed frogs, replicating an archaic pregnancy test. The frogs would be injected as many as 60 times each, resulting in significant pain and distress. Animal pregnancy tests were long ago replaced with better non-animal methods.

The anthropologist was also going to give away five frogs to exhibition attendees so that the women could perform the test in their own homes—with no guarantee that the frogs would not be mistreated, killed, or released into the wild, where a fungus that African clawed frogs carry that kills other species of frogs could wreak havoc on wild amphibian populations.

After learning about the gallery’s plans, PETA immediately called on the gallery to cancel the exhibition and was in the process of filing a cruelty complaint with local authorities, issuing an action alert, and calling in amphibian experts—but this turned out to be unnecessary as the cruel and risky demonstration and giveaway were quickly replaced by a lecture.

The moral of the story? Cruelty to animals may occur in unexpected places—but wherever we see it, we must never be silent.