My “case of the Mondays” went up in smoke as soon as I read about a capless, clueless cop who landed himself in hot water during a PETA India protest outside the Calcutta Zoo.

The officer, Assistant Commissioner Anil Kar, wasn’t about to interrupt a smoke break to make an arrest. Instead, he held his coffin nail* (see note below) in one hand—and in the other, he held PETA India’s own Chiranjeet Karar, who was decked out in a police uniform and monkey mask and was encouraging people to boycott zoos because they incarcerate and exploit animals, not to mention that Indian zoos are extremely substandard and that animals are frequently denied basic care. 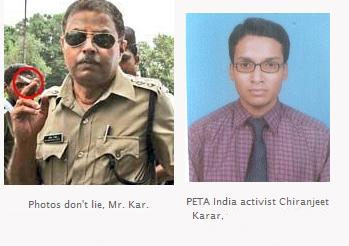 The multitasking officer didn’t realize that smoking on duty is a no-no (Yes, Rule 13 of the Police Regulation of Calcutta states that police officers in uniform are forbidden to smoke on the streets), as is abandoning various parts of his uniform.