If you’ve never been implicated in a preposterous conspiracy theory, I can highly recommend the experience. It’s a roller-coaster ride of emotions from shocked to flattered to downright amused. This is especially true when the person responsible for the conspiracy theory is a high-ranking government official, as we discovered last week when we were tipped off to an alleged claim by U.S. Secretary of Labor Elaine Chao that PETA’s Kentucky Fried Cruelty Campaign is not what it seems—that it is (wait for it) a cleverly disguised initiative designed to help labor organizations pass bills that will assist in unionizing workers.

In response to Chao’s statement, which she evidently made while speaking at one of Grover Norquist’s “Leave Us Alone” meetings, we’ve sent her a little letter to clear things up and to ask for her support in the campaign. Just so that this point is crystal clear—PETA’s campaign against KFC is single-mindedly focused on that company’s treatment of chickens (which, by the way, is appalling). On account of we’re an animal rights organization. I.e., an organization that concerns itself with the treatment of animals. Like chickens, for instance. Which is why we have a campaign against a chicken chain. I do hope that makes sense to everyone. Anyway, here’s the letter: 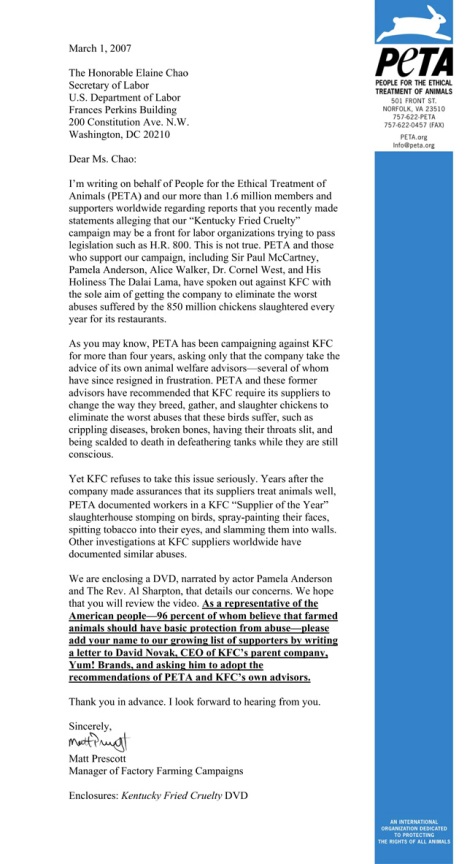