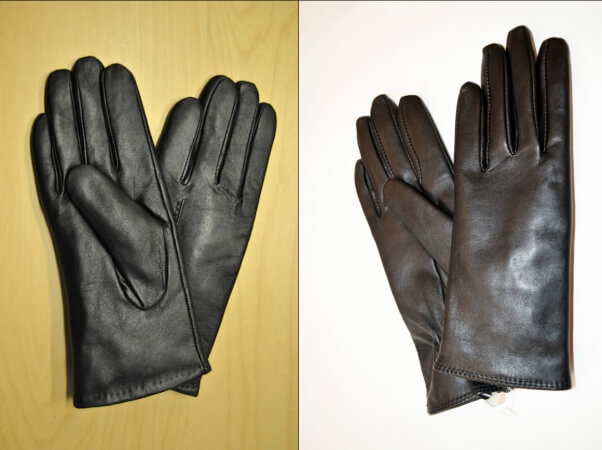 Dog leather vs. cow leather. Can you tell which is which?

In his letter, available here, Hastings notes that while the U.S. has banned the import and sale of fur and leather made from dogs and cats, a PETA Asia investigation revealed that workers grabbed terrified dogs with a metal noose, clubbed them, slit their throats, and cut off their skin to make dog-leather gloves, toys, belts, and other items that were later exported to the U.S. Hastings proposes randomly testing Chinese leather products to make sure that America’s import laws are not being openly violated.

“PETA Asia has documented that dogs were rounded up, beaten in the head and body with a metal bar or wooden post, skinned, and made into leather gloves bound for the United States,” says PETA President Ingrid E. Newkirk. “These articles are never labeled ‘dog leather,’ so the U.S. needs to step up and protect America’s import laws, its consumers, and dogs alike.”

A PETA Asia investigator obtained dog-leather gloves from China’s Jiangsu province, where dog slaughter is a regional trade. PETA Asia’s investigator learned that one facility alone bludgeoned and skinned 100 to 200 dogs a day, and the investigator saw workers tear the skin off dogs who were still alive.

Take the pledge and give leather the boot.