Animals—from horses to birds as well as those killed for their fur, skin, and flesh—have a friend in Dan Piraro, creator of the wonderfully offbeat internationally syndicated cartoon Bizarro.

Now Dan has stepped up for cats used in excruciating (and scientifically inferior) pediatric intubation training at St. Louis Children’s Hospital. Trainees who are enrolled in the Pediatric Advanced Life Support (PALS) course at the facility repeatedly force plastic tubes down cats’ windpipes. This painful procedure often causes bleeding and swelling in the tissues of the cats’ throats and can also lead to scarring, collapsed lungs, and even death! Manikins and advanced simulators have proved superior to the use of animals for intubation training, and the sponsor of the PALS course, the American Heart Association (AHA), exclusively recommends the use of these humane methods—not animals—for this training. The AHA has also distanced itself from the few facilities such as St. Louis Children’s Hospital that continue to use animals in PALS.

Dan, a former student at Washington University in St. Louis (which offers the PALS course in conjunction with St. Louis Children’s Hospital), has fired off a letter to the editor of the St. Louis Post-Dispatch, writing, “It doesn’t take a medical degree to recognize that practicing intubation on a limp cat is nothing like doing the same procedure on a larger, crying, squirming and/or coughing human child.” And to make that point even clearer, he included this cartoon: 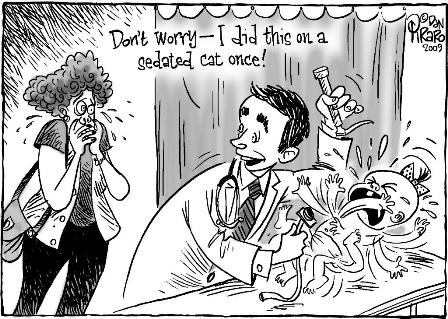 Definitely worth a thousand words! But you don’t have to be an artist to tell St. Louis Children’s Hospital that “first, do no harm” should include our feline friends—all you have to do is click here.