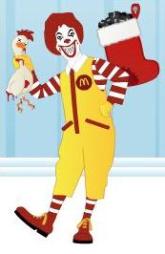 PETA asked for your help in picking the naughtiest person of 2010, and boy, did you guys come through—to the tune of more than 2.7 million lumps of coal! And the “winner” is … Ronald McDonald. The cruel clown got a run for his (blood) money from the CEO of SeaWorld, but in the end, it was no contest.

Well, what else would you expect when you’re the embodiment of a company that refuses to adopt a less cruel method of chicken slaughter, instead clinging stubbornly to antiquated practices that result in the abuse of countless chickens, who suffer broken bones, cut throats, hemorrhaging, and immersion in scalding-hot water—all while they’re still conscious?

Now that we know he’s the worst offender of the year, let’s persuade Ronald to make a New Year’s resolution to be kinder to animals in 2011! To tell McDonald’s, “I’m hatin’ it,” just go here.