You should check out our brand-new Burberry website. It’s called BloodyBurberry.com. There was a dreadful, gut-wrenching moment a few months back when it looked like we were going to call the site Furberry.com, but clearer heads prevailed and we opted for alliteration instead of a rhyming pun—which is always the right decision if you’re at all serious about animal rights (though we have to learn that lesson again and again).

Previous dangerous rhyming-pun situations in our history have included “Shameway,” when we waged a successful campaign against Safeway to enforce stricter animal welfare standards despite hinging our entire slogan on a rhyme that some might say doesn’t even work at all. This little glimpse into PETA’s history aside, you should check out the new site—it’s fantastic, and it’ll make you want to avoid Bloody Burberry like the plague until they get their heads out of their asses and stop selling fur. 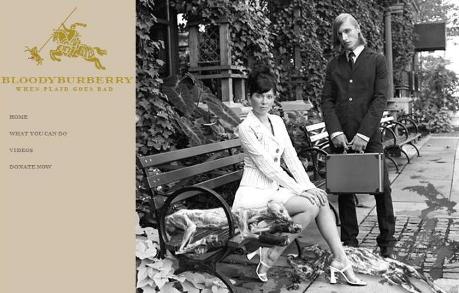