It’s not like I don’t already watch Bones religiously, but I’m definitely tuning in for this week’s episode, in which our intrepid heroes, Brennan and Booth, try to get to the bottom of the murder of a chicken factory farmer. The main suspects are the farmer’s neighbors—who are no doubt not terribly keen about living next door to a stinky, putrid factory farm—and animal rights activists. Considering, however, that the show’s star, Emily Deschanel, actually is an animal rights activist, I have a feeling we won’t be dealt with too harshly.

In the past, Bones has done a great job of exposing the cruelty of dogfighting and horse slaughter, so I’m hoping that the producers will manage to squeeze in some of the factory farm and slaughterhouse footage that we sent them for this episode. It would be pretty cool for the millions of Bones fans to get a look inside a typical factory farm.

Set your DVR: “The Tough Man in the Tender Chicken” airs tonight at 8:00 p.m. EST. In the meantime, you can get a sneak peek at the action in this slideshow: 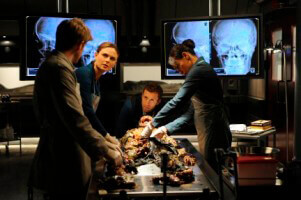 Bones: Episode 5.06 “The Tough Man in the Tender Chicken” Photos