Following the deaths of five dogs in less than a week in this year’s Iditarod, members of PETA held a candlelight vigil as they called for an end to the deadly race. Mourners have been placing flowers and cards at the Balto statue in Central Park—as well as at the Iditarod dog sled race memorial statue in Anchorage, Alaska—in tribute to the five dogs who died this year and the more than 150 dogs who’ve died since the first Iditarod race. Fern Levitt—director of Sled Dogs, a new documentary that draws back the curtain on the cruel race—also attended the vigil.

The vigil was held Saturday, March 18, at the Balto statue, between The 107th Infantry Memorial at East, 67th Street and 5th Avenue and the Willowdell Arch, Central Park.

Raced to death. Five dogs are dead because of this #Iditarod race. PETA supporters lay flowers at statue in #NYC #CentralPark. #iditarod2017 pic.twitter.com/2sqGm4YLG3

Three-year-old Shilling, who collapsed and died on the trail on Wednesday, was at least the 151st dog to die in the Iditarod. Other deaths this year include an injured dog who’s suspected to have died from hyperthermia, a dog who was hit by a car after he had escaped from his handler, and two dogs who collapsed on the trail and died from “acute aspiration pneumonia,” which may have been caused by inhaling their own vomit. 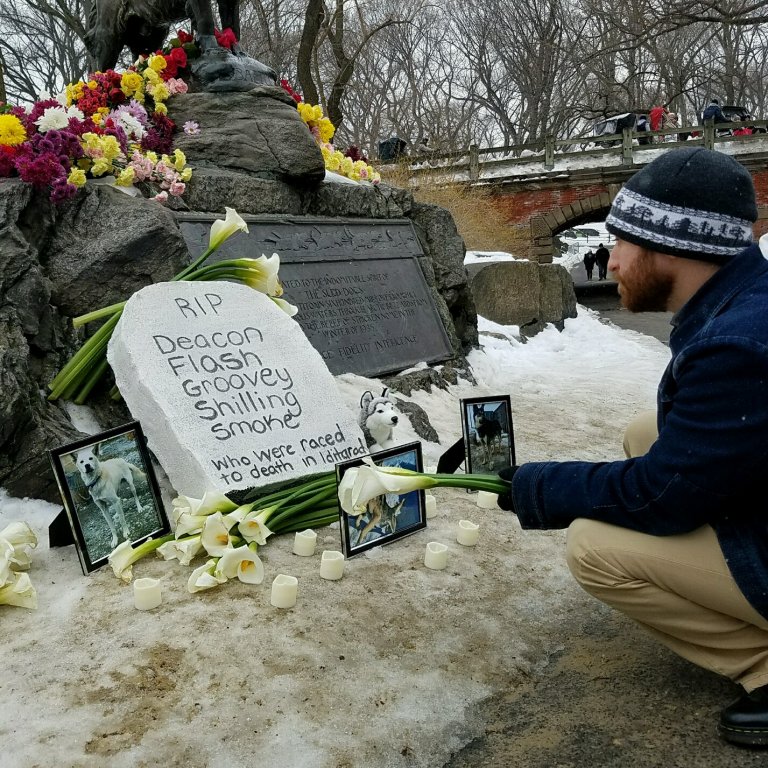 Dogs in the Iditarod are forced to run nearly 1,000 miles—roughly the distance from Orlando, Florida, to New York City—in under two weeks. On average, they must run 100 miles a day, with only a few brief periods of rest. They’re subjected to biting winds, blinding snowstorms, subzero temperatures, and treacherous ice. Their feet become bruised and bloodied, and many dogs pull muscles, incur stress fractures, or are afflicted by diarrhea, dehydration, intestinal viruses, and “sled dog myopathy”—catastrophic muscle breakdown that often leads to death. On average, about half of them don’t finish the race.

With 151 dog deaths, it’s time to end the cruel Iditarod. Click the button below to sign our petition to the Iditarod Trail Committee urging it to put an end to this cruel race.