Pink is proving once again that she has a big heart. After someone threw a puppy off a Los Angeles overpass and into the river below, Pink donated $5,000 for emergency surgery, saving the young dog’s life.

Actor Dawn Olivieri (of Vampire Diaries fame) might have jumped into the river herself. She told Marie Claire magazine, “I will stop my car if there’s a stray animal along the side of the road. I’ve spent hours trying to catch lost dogs wearing collars so I can help people get their pets back.”

There were no animals on Paula Patton’s back at the Mission: Impossible—Ghost Protocol premiere in Moscow—her rep tells us that she braved Russia’s cold in a faux–fur coat.

Ke$ha recently traveled to the Ukutula Lion Park and Lodge in South Africa to help rehabilitate an orphaned lion cub. Although she fell for the cub (now named Ke$ha), she said, “I was glad to leave my lion, because an animal like that should live in the wild. Keeping [a lion] confined is really just inhumane.”

When True Blood star Kristin Bauer thinks something is inhumane, she spells it out. When the actor visits her family, she writes, “Tested on animals” in black marker on her family’s products that aren’t cruelty-free.

The cruelty-free and fabulous Lea Michele graces DoSomething.org’s list of Top 20 Celebs Gone Good for 2011 in honor of her work with PETA, including her ever-present animal-friendly tweets. Case in point: 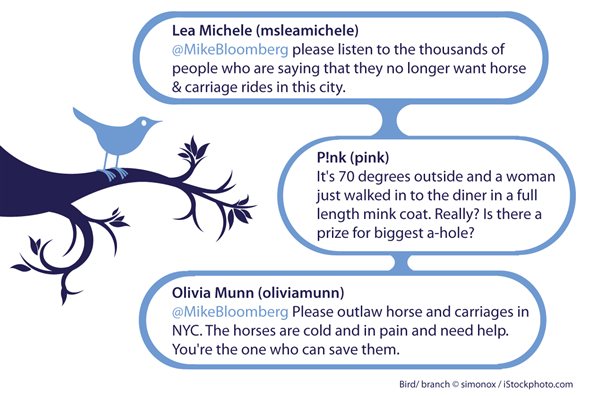