Usually, when we put the words “Canada” and “seal” in the same sentence, it’s bad news. But not today. Canadian officials are reporting that this year’s seal slaughter saw one of the lowest numbers of seals killed in recorded history. The 2011 commercial slaughter claimed the lives of about 38,000 harp seals, which, while still awful, is less than 10 percent of the 400,000-seal maximum. 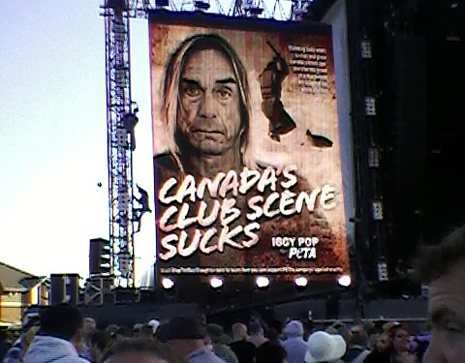 Iggy Pop got word of the cruel seal slaughter out in a big way to the 50,000 people attending the Isle of Wight Festival in the U.K.

The slaughter officially ends today, although under “ministerial descretion” sealers can stay out longer. But why would they? Fewer and fewer sealers are participating in the slaughter. With the U.S. and European Union bans on seal-product imports, the price of a pelt has plummeted to $20 or $30, barely enough to cover the sealers’ expenses for fuel and boat insurance.

To help continue the seal slaughter’s downward spiral, tweet at Canadian Prime Minister Stephen Harper (@pmharper) and ask him to stop supporting the bludgeoning and live skinning of baby seals, and ask your friends and family to speak up for seals too.
Written by Michelle Sherrow