As Canada’s annual seal slaughter garners worldwide disgust, the government is frantically grasping at straws in its effort to prop up this cruel, dying industry. Despite the fact that Canada spent millions of taxpayer dollars this year to promote the massacre, very few sealers took part. Of the 400,000 seals allowed to be killed, 37,609 animals have been killed this year. 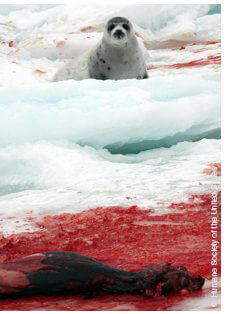 In response, the government announced that the slaughter would be extended indefinitely. But extending the timeframe for sealing won’t change the fact that seal pelts are banned by the U.S. and the European Union and that many other countries won’t import them. Pelt prices continue to plummet, and Canada continues to lose money every year.

If you are a Canadian resident, you can e-mail Prime Minister Stephen Harper and ask him to use your tax money to invest in alternatives for sealers instead of supporting an expensive, unnecessary industry that is a scar on the face of Canada.