How does three months of free fitness coaching just in time for swimsuit season sound? Good? How about throwing a few cool Benjis PETA’s way without touching your wallet? Even better? Whether you’re a couch potato or a die-hard runner, you can become a member of the 2011 PETA Pack team and do both. 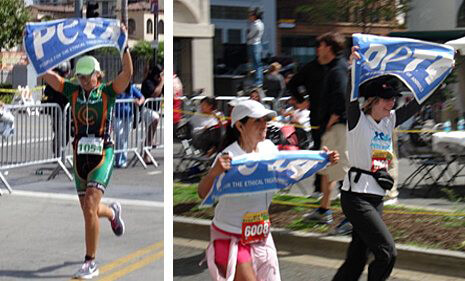 Starting on July 1, under the guidance of vegan tri-athlete, author, and speaker Brendan Brazier, PETA Pack-ers across the country will begin running for animals with others in their area or training on their own with support from the group. Training lasts until October when everyone completes a half-marathon (13.1 mile) or a 5k (3.1 mile) race of their choosing, with the money that they raise going to PETA’s Investigations & Rescue Fund.

Having your friends and family sponsor you keeps you motivated and supports PETA’s lifesaving work for animals. Not only that, but the top fundraisers get some pretty awesome prizes. They haven’t all been announced yet, but last year’s top prize was a trip to an exclusive vegan resort in Costa Rica!

Visit our PETA Pack team site to get more information and sign up to run with the Pack.