In Wednesday’s New York Times dining section, someone thought it would be a riot to take the decapitated, amputated, defeathered corpse of a chicken and prop the body up in a sexually suggestive “come hither” pose.

PETA President Ingrid E. Newkirk was not amused. “When I saw it, I just couldn’t believe that an editor of The New York Times would find it acceptable,” she told The Atlantic Wire. “It’s downright offensive, not just to people who care about animals but to anyone. It’s a plucked, beheaded, young chicken …. [That’s] necrophilia. It’s not amusing. It’s just sick.” 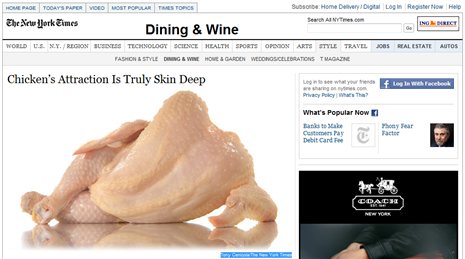 Some have suggested that PETA, which has never shied away from using nudity to make a point, is in no position to cast stones. Excuse me? A key difference between PETA’s ads and the New York Times‘ photo is that our models are willing participants who are still very much alive.

Is it a sign of how desensitized our society has become to the animals who are violently slaughtered for food that someone would think it a “sexy” joke to pose a young chicken—a baby, really, as chickens are slaughtered at 6 to 8 weeks old—like the star of a lingerie commercial. But picture in this bird’s place the decapitated, amputated, skinned corpse of a puppy or a kitten. Would anybody be laughing—or licking their chops? Doubt it.

What do you think of the New York Times’ sexually suggestive chicken photo?