As all you fashionistas out there are probably aware (and everybody else probably isn’t), Giorgio Armani opened a boutique in New York City this week. Paris Hilton and Kanye West (the man who has an employee whose sole—pun intended—job is wrangling the rapper’s 400-and-some-odd shoes) were thrilled. Bunnies on fur farms? Not so much.

Of course, we couldn’t let Armani’s little shindig go off without a hitch, so we sent a veritable brigade of bunnies to fight for their liberté and egalité. As you’ll note in the photos below, they were an oddly cheerful bunch, even though they had to stand outside in the cold for upwards of four hours—until the last scrap of red carpet was rolled up. At that point, they lined up in formation and marched down the street waving their signs, followed by a contingent of photographers who must have thought they’d died and gone to Easter Bunny heaven. 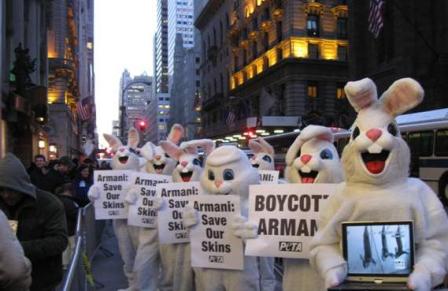 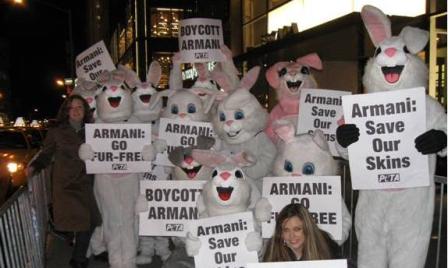 I wonder—if 16 giant white bunnies show up on a Manhattan sidewalk, does that mean that spring is only a couple of weeks away …?