We were blown away (sorry) by the Kentucky Fried Cruelty demonstration that PETA Asia-Pacific held earlier today. Maybe it’s a cultural difference, but in that part of the world, people apparently go into giggling fits over the very idea of blow-up dolls. Go figure!

Anyway, the clever folks at PETA Asia-Pacific, with the help of a posse of, um, inflatable activists, just held a truly “out-there” demonstration in the Patpong red-light district of Bangkok. The scene drew crowds of onlookers, and the live activists gave local residents a mouthful with regard to KFC’s cruel treatment of chickens. 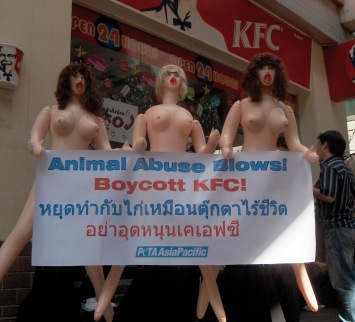 While we were a bit amazed by the photos of the demonstration ourselves, we know it will convince some curious people to check out KentuckyFriedCruelty.com. There they can learn about how chickens raised to fill KFC’s buckets are drugged and bred to grow much larger than normal, have their throats cut while they are still conscious, and are often scalded alive in defeathering tanks.

Considering the shocking treatment of chickens, I understand why PETA Asia-Pacific would hold a demonstration that nobody could ignore. But maybe that’s just me. What do you think? Was this demo a little too much or exactly the kind of attention-getting tactic that chickens need? Post a comment below with your thoughts.