As a clarion call to people of faith, a priest recently bestowed a blessing upon sheep who were bound for live export aboard a cargo ship in Fremantle, Western Australia. In a public display of solidarity, the priest blessed the sheep with holy water before they were loaded onto the cargo ship Mayora. 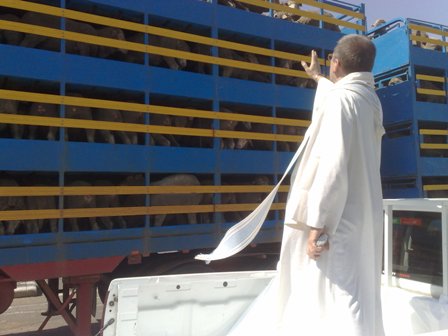 Father Mostowik is the director of missionaries for the Sacred Heart Justice and Peace Centre and is certainly no stranger to social justice. Thankfully, his ethics include the understanding that compassion must reach to all beings, not just the talking two-legged ones. His powerful message, while unspoken, was made loud and clear. It is a signal to us believin’ folk of various faiths that our duty of compassion should extend to all of God’s creatures.

While it’s wonderful that Father Mostowik is using what he believes is right to take action in his own way, we here at PETA know that these animals need a heck of a lot more than a kind blessing. These animals need action, kindness, and support.

The slave ships that drag these animals across the globe are an ugly truth that usually goes unseen. Crammed together with hardly any room to move, some animals often don’t survive the journey. Australian sheep are kicked, beaten, and dragged off boats by their ears and legs; they are often left to suffer and sometimes die in barren feedlots. They are bound up and thrown into the trunks of cars, and they are slaughtered in prolonged and cruel ways that are illegal in the U.S., Europe, and Australia. A PETA investigation in 2006 revealed horrible cruelty in this industry. You can watch the video here.

We hope Father Mostowik has the ear of quite a few people who’ve yet to hear just how horribly these animals are abused.

The fact that more and more religious leaders are taking aim to relieve the suffering of animals indicates an exciting shift in public consciousness. However, these calls to action merely point the way. In order to alleviate the suffering of millions of animals who are bound for our dinner plates, archaic recreation, or clothing, the responsibility to act falls on every one of us cruelty-free peeps no matter what holidays we celebrate.