Today in London, acclaimed novelist, playwright, actor and social justice leader Benjamin Zephaniah helped PETA Europe launch its new “Animal Liberation Project,” which points out some pretty shocking parallels between injustices of the past and the treatment of animals today. 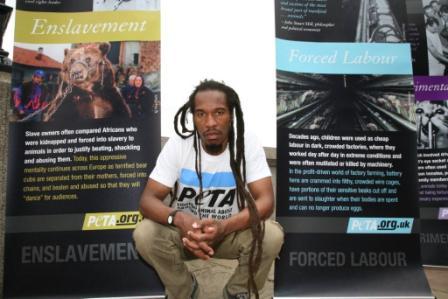 The exhibit forces people to think about whether or not it is appropriate to compare perpetually chained performing bears to shackled human slaves. Or battery-caged hens to child sweatshop workers. Or painful procedures performed on unwilling human subjects to the experiments that torture and kill millions of animals in laboratories. But really at its core, the exhibit is all about challenging the “might makes right” mentality that was the very foundation of human slavery, child labor and the denial of women’s equality and which is also responsible for factory farming, animal experimentation and other abuses to animals—and people—today. The launch of the project was timed to coincide with the 200th anniversary of the British Parliament’s ban on the human slave trade and took place in London along the Thames, where more than 750,000 captured Africans were once traded. Powerful stuff, for sure.

Check out what Benjamin had to say about the exhibit here, in an op-ed he wrote for The Guardian. And click here to see the full Animal Liberation Project and judge it for yourself. 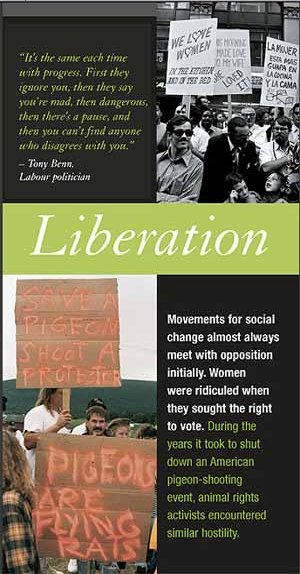