John Hargrove was known as one of the most experienced orca trainers in the world. Working at SeaWorld was his dream job.

But over time, Hargrove came to realize that SeaWorld has neither the orcas’ nor the trainers’ best interests at heart, and he resigned. The eyewitness accounts Hargrove recounted in the documentary Blackfish were crucial in helping the public understand why orcas don’t belong in captivity. He went on to write a New York Times bestselling book called Beneath the Surface that gives even more evidence that marine parks can’t come close to meeting an orca’s needs

Hargrove has become the go-to speaker about everything related to the inner workings of SeaWorld, and has courageously faced backlash from a corporation that would rather he kept his mouth shut.

Beneath the Surface comes out in paperback April 19. 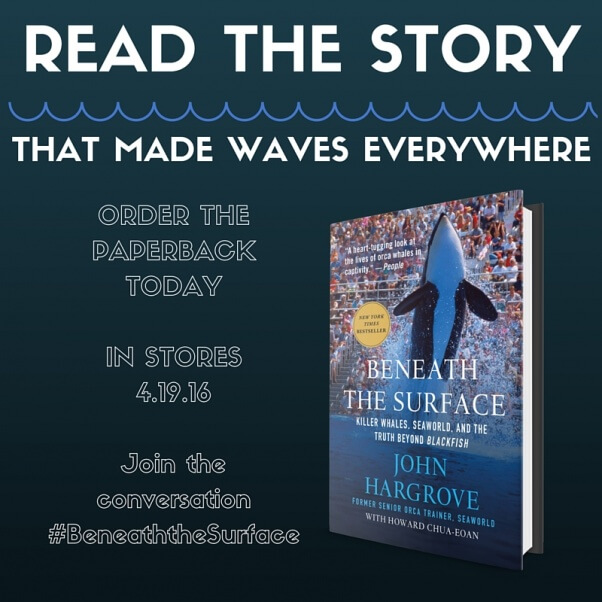 It’s been 3 years since “Blackfish” came out, and a year since your book was published; did you think SeaWorld would so quickly halt the breeding program you helped initiate, then exposed and fought?

I knew it would happen, but not this soon. This victory was a phenomenal group effort. Groups like PETA created the environment in which a movie like Blackfish could find mainstream success. Every activist—from protestors in the streets to people who just push the message online—brought about the tipping point. You can’t trust SeaWorld though, that’s why we’re working to back their new policy with legislation, which I’m encouraged to see that the new CEO does not oppose. It definitely feels like a new era.

What is your response to SeaWorld’s claim that the animals cannot be transitioned to protected sea sanctuaries?

I can say firsthand we’ve tried every enrichment imaginable at SeaWorld and nothing stops the aggression, depression, collapsed fins, vomiting and teeth grinding common in the tanks. It’s ridiculous for SeaWorld to pretend the whales are better off in captivity than in their natural habitat—two words SeaWorld employees face discipline if they use. I fully support PETA’s efforts to get the orcas into seaside sanctuaries.

What is life in a tank like for orcas?

SeaWorld’s captive orcas are in constant misery because the tanks are pumped full of chlorine, aluminum sulfate and ozone to prevent the rampant infections unique to confinement. Their lungs, skin and eyes are affected horribly, When trainers still worked in the tanks, our eyes got such bad chemical burns that we got sent for emergency treatment and sometimes had to wear patches for days at a time—and we were only in the water for a few minutes. Imagine living in it? SeaWorld’s claim that the tanks protect the orcas from “pollution in the wild” would be hilarious if it wasn’t so tragic.

If you could go back and do it all over again, would you decide against working at SeaWorld?

I don’t regret my career at SeaWorld. I feel incredibly lucky that I got to personally know these magnificent, individual orcas—and incredibly honored to play a part in fighting to free them. This was my destiny, and I look forward to working with PETA to keep on defending marine mammals around the world.