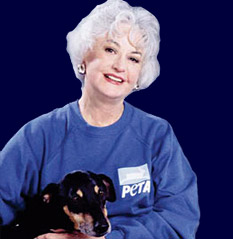 The wonderful Bea Arthur, whose record in terms of helping to advance the rights of animals is as impressive as her unforgettable performances in Golden Girls, has gone out on a limb once again for animals—this time to help the rats, lizards, and other animals who get a raw deal in pet stores, where they’re inadequately cared for and often destined for a miserable life even if they do survive the lousy conditions they’re kept in.

Bea, who was deeply affected by PETA’s undercover investigation of a PetSmart store in Scottsdale where scores of small hamsters, birds, and other animals were left to suffer and die, has written to PetSmart CEO Philip L. Francis urging him to permanently end the sale of live animals in his stores. As she puts it in her letter,

“This was a store that, according to one of your executives, has ‘an outstanding pet care team and an exceptional pet care record. But PETA’s findings show a sad and different story. . . . I look forward to the day when you stop selling live animals. Until then, I cannot in good conscience shop at PetSmart, and neither can my friends or family.”

You can check out her letter here, and the investigation that she’s referring to is below. Thank you, Bea Arthur. You rule.