Well, not really a battle, but I’m a sucker for a title with a bit of internal rhyme. More like a skirmish. A minor tiff. The story is that the Town Council in Brattleboro, Vermont, were not particularly pleased about PETA’s recent full-monty nude fur protest in their town, which, due to an odd loophole on the law books, has some very lax legislation about public nudity. The protest has apparently brought renewed calls for a permanent ban on public nakedness in Brattleboro. Which really does seem like a shame.

Well, we’ve offered them a solution that’s a lot less of a joykill: How about banning fur (I’m talking about, like, fur coats here) in Brattleboro instead? That way, they can do a nice, positive thing for the community and avoid naked PETA protesters at the same time. Or as PETA VP Bruce Friedrich puts it,

“What could be more offensive than draping your body in the skins of tormented animals and trying to pass it off as a ‘fashion statement’? Nudity doesn’t hurt anyone, but wearing fur does—and it shouldn’t be tolerated in modern society.”

To further sweeten the proposal, we’ll send a trio of emissaries—fully clothed in furry animal costumes—to host a champagne celebration for the town, if the board agrees to the proposal. How can you possibly turn down a deal like that, Brattleboro? You can read our letter to the Town Council here. 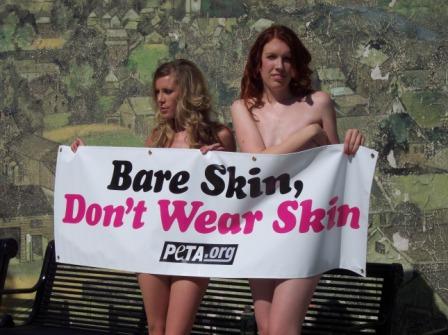